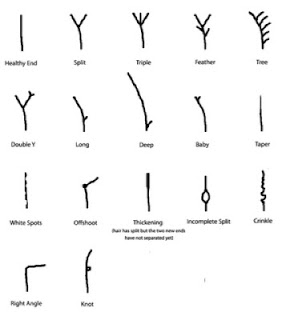 READER QUESTION: When my hair is out and I run my fingers through my hair, I sometimes notice that I have tiny balls on my ends and I don’t know if they are knots. I trimmed my ends but I still seem to have them. What is causing them and how can I fix this in order to retain length?

CURLYNIKKI’s RESPONSE: I wish there was an easy answer to your question but there really isn’t. The balls you are seeing are called single strand knots and unfortunately, they come with the natural hair territory. They’re also commonly referred to as fairy knots because they’re so impossibly small, that only a fairy could’ve tied them. While some believe them to be a benign issue, they drive me nuts and I have no choice but to seek them out and snip them off.

For those of you that have no idea what I’m talking about, good for you! They unfortunately have plagued me since going natural. They’re so strange and unfortunate; a single strand of your hair, actually ties a knot in itself! Ridic. I hate the way they feel and they always get caught on adjacent hairs and cause even more tangling than usual and I just… I can’t… so I snip them, or else I snap them off with my finger nails. Ratchet. I know. This is a very annoying problem — one of which a resolution has yet to be found.

Although I haven’t found a routine to eliminate the knots completely, the below tips will most certainly help you reduce single strand knots and keep them at bay:

-No more wash-and-go’s! Leaving my hair to dry without styling it causes it to fully shrink. No matter what leave-in or styler, I use, wash-and-go’s always lead to knot city. I never experienced more knots than when I was wearing wash-and-go’s. I recently revisited the wash-and-go and in less than a month I’ve developed no less than 30 single strand knots.

-Seal ends with a butter or oil. Remember to use a water-based moisturizer first and then seal in the goodness with the oil. I find that the layer of oil really helps to smooth and calm my hyper-curly ends.

-Stretch ends. Straighter ends have a harder time coiling up on themselves, and thus a harder time forming fairy knots. I stretch my ends on rollers when I prep for styles.

-Protect ends. Buns helped a bit, but the knots were still there. Twist-out, then bun for best results. You could also rock twists, braids or any other style that keeps the hair stretched and protected. It’s also important to protect your hair from the elements. Humidity causes my hair to take on a rough texture and the resulting shrinkage leads to knots. Also, I avoid windy situations. I don’t let my hair blow in the wind while driving down the highway or even wisp about on windy days out doors. I’ll end up with a mess of knots!

I hope this helps! Please feel free to share your experience with fairy knots and what if anything has worked for you!

Nikki Walton, founder of CurlyNikki.com, is a successful psychotherapist and creator of the most credible online source about natural hair care, maintenance and decoding the psychological ties between black women and their hair. She’s the author of the book Better Than Good Hair.