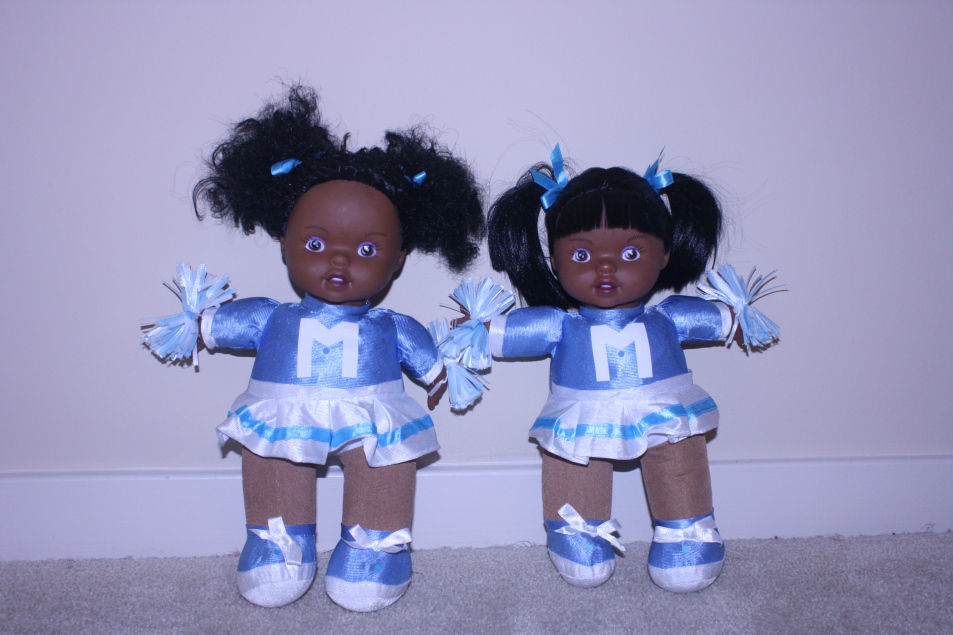 I read and watched this video a year ago, but started thinking about it the other day. It still saddens me.

A few years back I watched “A Girl Like Me” which is a documentary by Kiri Davis. Within the short film, Kiri did an experiment that some coined the “New Black Doll Test”. Like the original Black Doll test performed by Dr. Kenneth Clark, she asked a group of Black children which doll they preferred to play with between a White doll and a Black doll. The majority of the kids chose the White doll. I decided that I wanted to recreate the same experiment using 2 identical black dolls; one with natural hair and the other with straight hair to see which hair texture a group of Black children preferred.

I must admit the hardest part of this experiment was finding a natural-haired doll so I decided that I would transform a straight-haired doll to kinky-haired. It was fairly easy to do. First, I wrapped small sections of hair around pipe cleaners I found at Wal-Mart.

Yeah, the doll was balding in the middle.  The doll had pig tails but I took them down and found no hair in the center. It was to be expected…they were cheapo! I got found them at Fred’s Discount Store. Anywho, next, I boiled hot water in a pan and dipped the doll’s head in.

Ughhh…I have the veiniest hands in America. I then let the doll’s hair to air dry.

Next, I took the pipe cleaners out.

I then put the doll’s hair in pigtails.

I later added Marley braid hair that I cut so it would be the same length as the straight-haired doll.

I teased the hair to make it look more natural.

The final result. For some reason the video didn’t pick up how the hair really looked.

You guys can check out the results of the Natural Doll Experiment here:

These children reflect the thoughts of most young people now. I held the same views until I was about 19 years old. These children’s parents and upbringing are no different from most of our own. More natural images should be put out into the world so there is at least a balance. Beautiful hair isn’t just straight; it’s kinky, coily, fluffy, puffy and wild too. Let’s encourage our children and one another to embrace kinky hair as well as straight hair. There is so much pressure for Black women to fit into the European standard of beauty but the beauty that our African ancestors gave us is just fine if you ask me. Encourage, compliment and inspire one another to continue to embrace natural hair.

Were the results of the Natural Hair Doll experiment shocking or expected?

Global Couture is trying to spread the word about embracing your natural hair. Love your HAIR, if it is wavy, curly, kinky or coily. See more at http://www.globalcouture.net/ and Follow us onFacebook, Twitter, Instagram. Email us to share your hair journey atglobalcouture@aol.com.