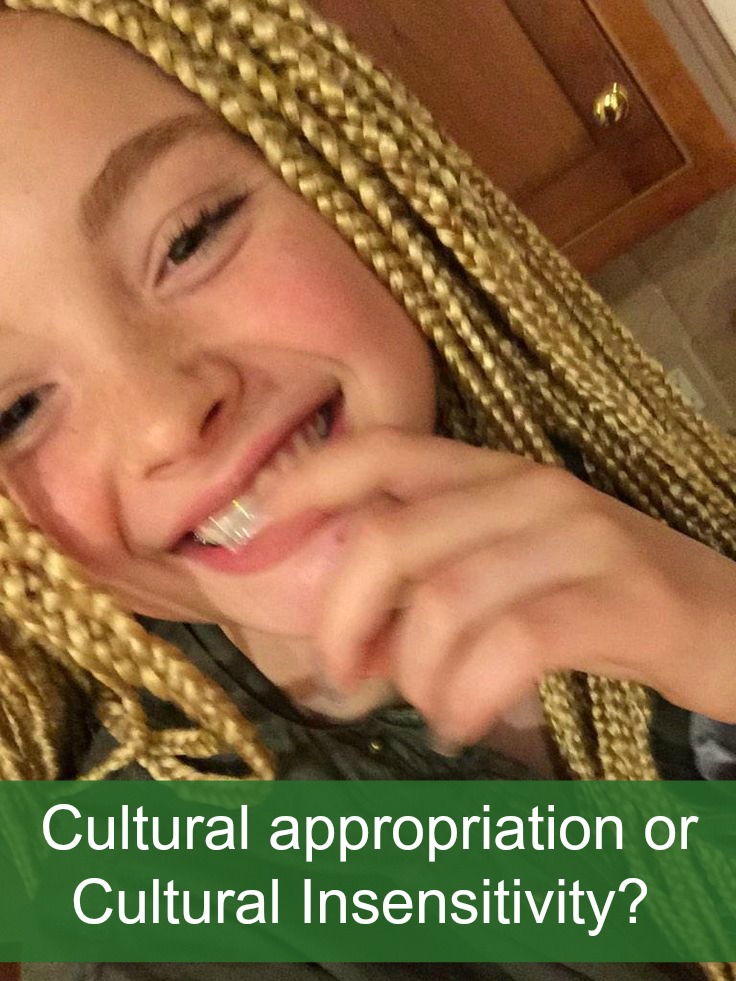 A few weeks ago, I heard about an article on lovebscott.com about a young girl who decided to get box braids for the first time. Since it’s an extremely popular protective style, I wasn’t surprised by this news until the person telling me about it mentioned one important detail: the girl in question was white.

​Not surprisingly, this changed the story a bit for me, and for a lot of black women. Social media exploded with comments about the girl’s hairstyle. Some (okay, many) immediately accused the girl of cultural appropriation or just generally being culturally insensitive. Others, black and white and every shade in between, argued on the young girl’s behalf, saying that everyone should be able to wear their hair any way they choose and that she doesn’t deserve all of the criticism because she didn’t get her braids done with any malicious intent. Either way, everyone had an opinion on her hair.

Now, the girl has since released a statement where she is quoted saying, “Sorry for perhaps making it seem like I am racist or ‘appropriating a culture’. I honestly just wanted longer hair and I saw a woman on the street with box braids and I really liked them. I had no idea that it would turn me into a ‘racist and stupid white girl’. I just wanted a hairstyle.” Her statement seems sincere, and I honestly doubt that a 12-year-old girl would go out of her way to get a hairstyle that she knew would offend an entire culture. When I was her age (wow, I never thought I’d use that phrase) I definitely had moments of wanting to recreate hairstyles that I saw in passing because they looked good on the other person. I did not, however, recreate something so drastically different and out of my comfort zone as this young lady did, but that’s just because I wasn’t the bravest kid.  Still, I can relate to her and see why she might be surprised at the reactions her pictures caused.

Personally, I buy her statement. I don’t think she meant to offend anyone with her hairstyle. She could’ve saved herself a lot of trouble if she thought first about the implications of the braids, but I wouldn’t expect too many young girls to think about that. I think the best reactionwould’ve been to try to educate the young girl about being more culturally sensitive, and some people did try to take that approach. So now here’s my real question: is this another case of cultural appropriation? Do those people on Twitter have a right to be angry? My answer is yes, especially if you put this event into context.

Imagine, if you’re not already, being a black girl for a minute. Your mom spends all of this time on Sunday evening making perfect cornrows in your hair—you know, the ones with the clips on the end that match your outfit. You go to school on Monday so excited to show off your hair to your friends, but the next thing you know, you’re in the principle’s office. Your hair has been deemed ‘distracting’, or ‘out of dress code’, and you’re forced to change it. Now pretend that instead of cornrows, they’re dreadlocks, or twists, or an otherwise perfectly shaped Afro. Little black girls and boys all around the country have to go through this every day, and it’s frustrating for child and parent alike.

Now pretend you’re that child again, but you see the 12-year-old white girl with long blonde box braids. You’re surprised, maybe a bit confused, and possibly angry. Why can she wear this hairstyle and be accepted by her peers and by almost any institution, but you can’t wear the same hairstyle and be as easily accepted? It’s unfair, right? That is the core of cultural appropriation, so I think this situation fits the bill. Again, I don’t think the young lady did this with any malicious intent. But I do think that’s what happened in this case.

Someone tweeted “You should be able to do whatever the f*** [you] want with your hair no matter what race you are f***!” You’re absolutely right, but sadly not everyone can wear their hair however they want to without being punished. So until everyone has that right, I don’t think we  will or should take events like this lightly.

I’d love to know your thoughts in the comments below.