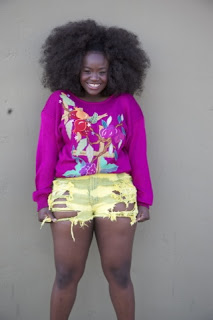 My name is Shoniqua Shandai and I am a performer in Hollywood, CA. I began my education in African Dance at 2 years old. I’ve been harmonizing with Tina Turner since before I could walk and have been in at least two different acting courses every year since 2004. I’m trained. Haha! Most recently, I’ve had the honor of playing the starring role in Mud Puddle Film’s newest feature “Zola Jumped In.” I absolutely love what I do, but so does over 108,000 other black girls in Los Angeles. And coincidently they all look like a variation of Lauren London or Gabrielle Union: beach ready bodies, long weaved hair, with an added coating of MAC Cosmetics. My short haired fluff stood out like a sore thumb, but ended up being exactly what I needed to differentiate me from the masses. After a little finessing of course. 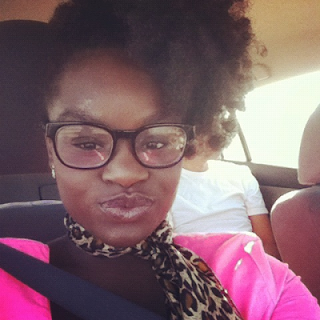 I wore my hair out for my 20th birthday in 2012. It was the last time I’ve worn my natural hair out up until this weekend shooting “Silenced.”

How long have you been natural?
I have been unintentionally natural for about… all my life. Growing up if your hair wasn’t permed, weaved, and similar to everyone else’s, you were bullied. Unfortunately, I was one of those girls who just could not get it together, hair wise. I’d hot comb my hair and by the end of the day have a sweaty, untamable bush. It was too soft to perm, too short to put in a decent ponytail, and grew too quickly for my mother’s budget to be maintained in decent braids. My entire freshman year of high school I wore hats just to avoid dealing with my mess. It wasn’t until I graduated and moved to Los Angeles to further pursue my dream of acting, that I learned how being natural could be used to my advantage. 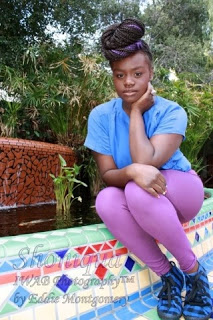 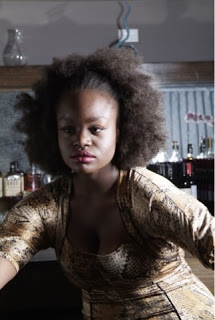 What has been the most memorable part of your journey? Has it been easy or difficult or both?!
My fro has gotten me so much work! It’s a conversation piece to say the least. I enter the room and immediately am on a common ground with anyone around me and then I let my acting skills finish them off. Haha! But it’s not mine: the fro. Ha!
I started wearing it a couple of years ago to give my real hair a break and it kind of took on a life of it’s own. It’s become my brand. I’m almost afraid to take it off because I think other people will freak out, but I’ve really been yearning to film something in my natural hair. Just to have something different in my repertoire. Actors should be chameleons; I don’t want to look the same in every single film you see me in.
Well this past weekend I filmed the trailer for the feature film “Silenced” and I wore my real hair! It was so invigorating. I felt like I had gone natural for the first time all over again. The hairstylist showed me a very sleek and sophisticated bun I could rock with my natural hair and I loved it so much, I wore it out and about that night. I threw on my gold catsuit and even with out the extra large show stopping bundle on my head, I still felt like funky fabulous me. A fear was laid to rest.

You can keep an eye out for the trailer of “Silenced”, which is being released later this month, by becoming a member of my Facebook Fanpage. www.facebook.com/ShoniquaShandaiFP 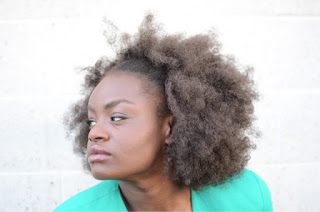 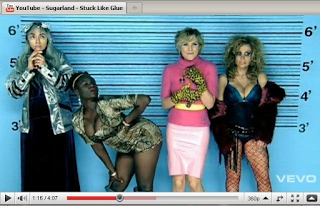 My natural hair in the Sugarland’s “Stuck Like” video Glue” music video in 2010.

What are some of your favorite hairstyles?
My fro! My fro! My fro! My fro! Ha! I’ve worn it a couple of different ways, but there’s not much versatility with a wig. I switch it up as much as I can. In my movie that recently won an award for Best Drama at the San Antonio Q Fest, “Violence of The Mind” I played Gina Claremore, who I’ll say is ‘very interesting’. I threw a bit of purple extensions in it to further connect to who she was. Last month I played a mentally disturbed teen and wore my hair in a ponytail throughout the whole shooting process. The trailer for “The Forgotten Heartbeat” will be released later this month as well. Look out for it on my Fanpage. 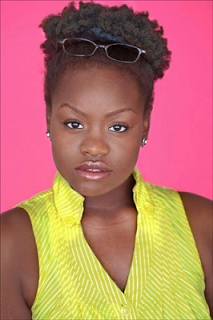 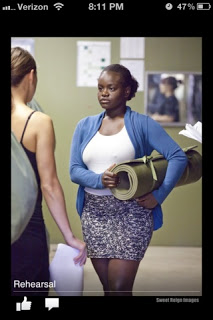 What is your hair regimen (including fav products)?
My mother makes her own all natural hair and skin products, we lovingly named it “Hair Jamboree: It’s a party for your hair”. I wear Hair Jamboree because it’s free. Ha! It’s not an actual line in stores. She just makes it for friends and family, but you never know…

What are some of your favorite natural hair websites,YouTuber’s, or blogs?
I have countless… ForeverTanedraTV is a youtube channel run by the 2008 Scream Queens winner herself. You may also remember Tanedra from her role of Simone in the Saw movies. Tanedra Howard is hilarious! Every video of hers brings me to tears. Her channel is definitely a must see. www.youtube.com/ForeverTanedraTV
There’s an up and coming natural singer that I am obsessed with. A lot of the times people associate natural hair with hardness, as if it’s impossible to be feminine and pretty whilst rocking your fro. Well Miss July Cruise proves all stereotypes wrong. She’s stunning, amazingly talented, and her performance videos are epic. I follow July on tumbler at www.JulyCruise.tumblr.com
Oooo and then there’s www.TiffanySBlack.com. I go to Tiffany Black’s website whenever I need a bit of inspiration. She is the hardest working woman, well second to Beyonce. HA! Her drive alone is motivation, and if you don’t believe me check her credits. Tiffany Black is an actress; the founder of Plenty Plennies, a website dedicated strictly to African American webseries; the head of Tiffany Classics, a production company whose had numerous stage presentations at the NAACP festival and various other accomplishments, and she’s written for Essence.com. You think you work hard?
And last but certainly not least, ME!! You can check out all my antics and updates on my webshow “Operation Household Name”. In an effort to keep my creative juices flowing I started up OPHN. That way even if the gigs stopped coming I’d still have an artistic outlet that’s dependable and consecutive, because it’s mine. Operation Household Name is viewable on my website www.ShoniquaShandai.com and my youtube page www.youtube.com/ShoniquaShandai. Below is one of my favorite episodes of Operation Household Name: Black World. 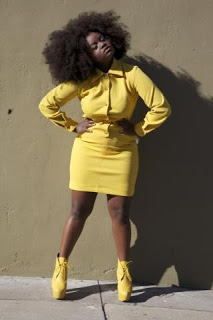 Where can readers find you?

http://www.youtube.com/watch?v=1TXDBEe_8LY
Trailer for Zola Jumped In

I have never worn a natural hair wig but this looks natural. What do you think? Would you rock it? Leave comments below. 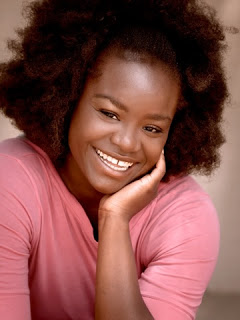