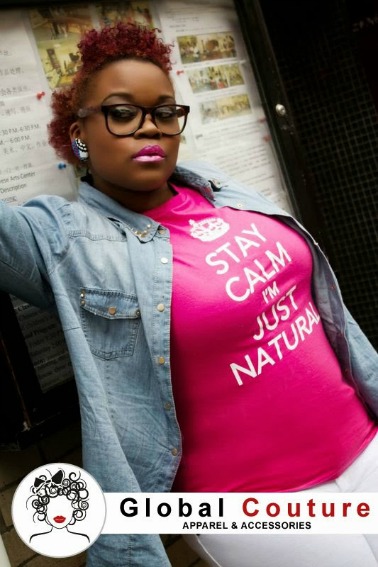 co-eds to sought-after female DJs and fashion mavens. But the market hasn’t quite caught up with this cultural shift.

Patricia launched GlobalCouture.net in January 2013 while equally immersed in her career as tenured professor and college counselor at Southwestern Illinois College and her work as full-time cultural researcher and doctoral candidate at UMSL. Adding yet another page to her portfolio, she announced the Global Couture Foundation just a year later.

Keller talked with MadameNoire about turning an old idea and a new need into a line of apparel, jewelry and accessories, her philanthropic ambitions and the phantom ideas of weekends and downtime.

MadameNoire: Define the concept of Global Couture for the uninitiated.

Patricia Keller: I came up with the idea of Global Couture while traveling, maybe six or seven years ago and I didn’t know what I was going to do with it. Now this has nothing to do with the business today, but I was talking to my sister and I said, You know I think there should be a brand that somehow embodies this idea of everyone being unique and special and it not being so unreachable. I was just thinking about something more relatable and the idea of beauty accessories. I was thinking handbags. I was thinking of a lifestyle brand. It was this random idea, and I said, “Can you imagine something like that in Target?”

MN: After holding onto the idea for so long, how did you know it was time to launch what is now the Global Couture brand?

As I was going through the transformation my style changed. It caught up with where I was mentally and had always been. I felt more comfortable expressing myself outwardly in a way that was reflective of where I was — just wanting to wear cultural pieces, wanting my appearance to really match what I was hoping I was projecting.

I was looking around for things like T-shirts or accessories. I was finding cute things but I wanted things that were a little more rich in culture. I wanted to be able to find them easily, so I thought, “Oh maybe I should just start making them.”

I wasn’t sure if anyone else wanted to wear them, to be honest. I just thought, “Let me start making a few things and then see how it goes.” I remember thinking, “I just want to put it out to maybe 50 people and see if they like it.” But I wasn’t really sure if other people were interested at all — especially in the natural hair community.

MN: Why did you decide to create button earrings and hair bows?

PK: I wanted something that you can wear in your ‘fro and it won’t snag. I’m low maintenance, I really only wear my hair in a ‘fro and [an] afro puff. Those are the accessories I could wear and it wouldn’t snag my hair.

MN: How have your career and academic background influenced the business model?

PK: The structure of the business is getting to the place where I initially wanted it to be with the Global Couture Foundation. That — because it’s what I do every day — has absolutely been influenced by my day job and educational background. I want to be sure that what I’m doing is helpful and impactful.

I would love for [the foundation] to be the primary thing that I did. The [store] is supporting the foundation’s efforts to clothe, educate and empower. If this part would be self-sustained, I would really feel successful. It’s one of the benchmarks. I think that because I don’t have any business experience, all of that is influenced by my career and my efforts to help people.

MN: What are your plans for the Global Couture Foundation in the coming year?

PK: This year I already launched the “I am global” campaign. Any t-shirts sold, all of the money goes to charity.

I’m also finishing up the actual website so that I can have a presence. That has been a long project — I’ve been working on that for seven months. [Also,] working to start forming some partnerships so that I can locally start small with doing some outreach — some workshops — around these issues.

If I can do those things — raise the money, donating my time to create the curriculum for the workshops — that component is my primary goal this year. That’s what I’ve been working on.

PK: You have to really be able to multitask. I stay extremely busy. The idea of the weekend has been redefined. I absolutely never have a day off, but this is the kind of thing that I like to do. Although I’m extremely busy, it’s just worked. It doesn’t feel laborsome. I just make a schedule to do everything. I tend to do things well in advance. For the blogging, I like to get a lot of that stuff out of the way. For the accessories, I make every single order that comes in. I set days that I mail everything, go to the post office — I still do all of that.

MN: What are your plans for taking Global Couture to the next level?

PK: I plan on [running Global Couture] full time at the end of next year. For me really to move things in the direction where I want to see things for the foundation and for developing the brand further, I will need to have more time to set aside to think and to work on things. And for complications. That will require that I have more free time. That’s the plan.